Do you find yourself spending tons of time in the gym?  Is all that time you’re committing to your workouts getting you the results you’re after?  Whether you’re trying to lose weight or put on a bit of muscle, compound exercises can help you reach your goals, without the unnecessary time spent working individual muscle groups.

What is a Compound Exercise?

A compound exercise is one in which multiple joints and muscle groups are involved.  A biceps curl, for instance, would not be classified as a compound exercise because the elbow is the only joint that moves during the lift. These single-joint movements are called isolation or accessory lifts.

1. Time-Saving – Compound lifts don’t just hit the arms, or only work the legs.  The beauty part is, they work even more muscle groups at once.  The ability to work multiple muscle groups in one exercise saves valuable gym time.

2. Increased Strength & Muscle Mass – Performing a compound lift enables you to lift heavier weight as compared to an accessory lift.  An exercise that can be done at a certain weight for only 1-5 repetitions is considered heavy.  Heavier weight equals greater strength and muscle mass.

3. Increased Metabolic Activity – The use of multiple muscle groups in one exercise results in a higher calorie burn.

4. Greater Core Stability – Compound exercises require a lot of cooperation from your core in order to complete the lift.  Constantly depending on your core to stabilize you while performing compound movements results in increased strength throughout the entire core.

5. Functional Strength –  Functional strength is not just a buzzword (buzz-phrase) of yore.  The strength gained from, and the repeated movements done with compounds translate into real-life benefits.  From lugging the groceries in from the car, or deadlifting heavy objects from the ground, compounds will have you tackling your everyday tasks with ease.

Squats primarily work your quads, hamstrings, and adductors.  The secondary muscles worked include your calves, glutes, lower back, and traps (trapezius); as well as your abdominal muscles.

With so many muscles involved, it’s no wonder the squat is often referred to as the King of all Lifts.

Deadlifts mainly target the posterior chain, including the lower back, glutes and hamstrings.  Secondarily, deadlifts utilize your hips, quads, abs, lats (latissimus dorsi) and even the calves to an extent.

Additionally, if you’re searching for a supreme exercise to target and build your traps, look no further than the deadlift.

Primarily the bench press works the chest, triceps and front delts (deltoids).  The mid and rear delts, lats, biceps, and abs also help you power through the entire movement. 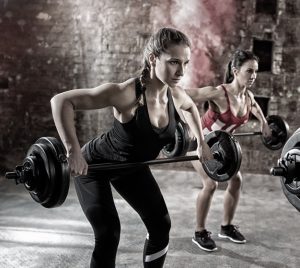 The barbell row specifically targets the muscles of the back, with the main focus being on the mid back, including the traps and rhomboids.  Flexing the glutes, hamstrings and abs protects the lower back throughout the movement.  The biceps and rear delts, as well as the lats also assist in successfully completing the exercise.

The overhead press is a shoulder-dominant movement, working the front, mid and rear delts primarily.  The triceps, lats, abs, traps and glutes get their fair share of work during this movement as well.

Pull-ups primarily target the lats and mid back, including the traps and rhomboids.  The biceps, shoulders, pecs, and abdominals aid in the completion of the exercise.

Do you know how many exercises you would have to do to equal the amount of work done in just one of the above movements?  A lot.  That’s a lot of wasted time in the gym when you could just do a few compounds and be on your way.

When to Use Isolation Exercises

While they are not as beneficial overall as their compound counterparts, isolations do have their place.

1. Mix-it-up – Boredom with your program sets in from time to time, and isolations can help pull you out of your workout funk.  Whether replacing a compound exercise with a few isolations, or sprinkling in an accessory or two, this is a great way to temporarily break up the monotony.

2. Substitute – There will be times when the equipment you planned on using at the gym could already be in use.  When this happens, sometimes all you can do is replace a compound exercise with a few isolation lifts.

3. Finishing Move – Although you can get a great workout with compounds, sometimes you might find you want to really burn out a muscle group.  Including an accessory or two, in order to focus on a specific muscle group, helps bring up lagging body parts and helps break through plateaus.

How I Know Compounds Work

Much of my workouts used to be devoted to isolation movements because I mistakenly thought more was better.  I would do several sets of different exercises for each muscle group, focusing on thoroughly fatiguing the muscles.

Turns out I would have had more luck commanding my biceps to grow (a la C.T. Fletcher) than I did doing hundreds of reps of every kind of biceps curl known to man.  It wasn’t until I started doing pull-ups regularly that I saw decent growth in my biceps.

I didn’t have much in the way of triceps until I started regularly bench pressing with heavy weight.  This was another muscle group I would continuously exhaust without getting the results I wanted.

Guess what?  My quads started growing when I finally got serious about squatting heavy.

And my glutes?  Yep, those and my hamstrings are much more shapely since incorporating deadlifts.

I don’t even directly train my shoulders anymore.  After a slight injury, I had to take all direct work out because it was too painful.  Now I find bench pressing, along with deadlifts, pull-ups, and barbell rows hit my shoulders nicely.  And I don’t miss the thousands of lateral raises I used to do, believe me.

I know this is all purely anecdotal, but I think it says a lot.  It wasn’t just one muscle group that benefited from switching to compounds, but several.

I put off doing a full-body lifting program because I thought they were too easy.  It didn’t seem like they contained enough work to stimulate muscle growth.  And being in the “more is better” mindset I couldn’t see myself going from 9+ exercises per workout to only 3 or 4.  It just didn’t compute.

Eventually there came a time when I wanted to focus on strength, so I finally went with a full-body program, most of which happen to be compound-heavy.  Turns out the muscle-gain I had been striving for, and was failing miserably at, came about when I started focusing on heavy compounds.  Now the above anecdotes speak for themselves.  And I wish I hadn’t waited so long.

There are several great programs you can try for yourself.  And while some have isolation lifts in them, the compound lifts are the key players.

If you’re a beginner, a full-body program is the best place to start.  Performing the same exercises 3 days a week will drill in the movement patterns, and make you more efficient at doing them over time.  This will enable you to lift more and more weight, which translates to greater muscle gains.

If you’ve been dodging a full-body program (like I did), and compound movements in general, give it a try.  You might be surprised how well you do.  And even more surprised by the results.  I know I was!  Pleasantly surprised.

This site uses Akismet to reduce spam. Learn how your comment data is processed.